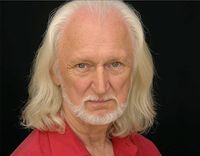 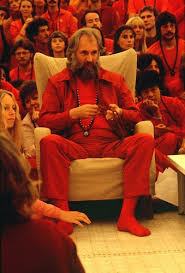 Teertha at the Orange Connection 1981 in ICC Berlin

Paul Lowe was born in 1933. When he arrived in Pune One, he was already a major Human Potential Movement leader, having co-founded the growth center Quaesitor in London with his then-wife Patricia Lowe, who soon became Ma Anand Poonam. After taking sannyas, he continued to run Encounter groups, which became known as the toughest group in the ashram.

There were a number of "therapy groups" happening in those days. While they did resemble similarly-named processes in the "outside world", that resemblance was limited to the techniques used and the training group leaders had in their fields before they came to Osho. Their whole purpose was completely different: such processing as happened in them was not to restore a non-functioning member of society to "normal" functionality but to see into the masks of personality which conceal and obstruct the inner essence, and help them to fall away, not by force of will, but by that very seeing. In this way, a habit of looking within was given real assistance, making meditation a much easier and more natural flowering.

In Pune One, Teertha sat in the center of the front row for Osho's discourses, reading aloud the questions and sutras that were to be the material Osho would comment on that day. He was widely seen as the most likely "heir apparent" to Osho. This view was reinforced big-time when Osho stopped giving sannyas personally to seekers arriving and assigned that role to Teertha.

This "heir-apparent" image started to unravel, as many things did, at the Ranch. Teertha still gave sannyas to newcomers but there were no discourses for him to sit front and center at, no sutras to read, no daily public recognition. He was also snubbed in Osho's 21 Enlightened joke. Possibly to fill the vacuum, he started to act more like a Master-unto-himself when on tour in Europe. When Osho began speaking again at the Ranch, it wasn't long before there was a parting of the ways:

"Through the years I had worked on these therapists and their therapies, and they started feeling that they had become kinds of gurus, masters. And deep down there was great competition amongst them: Somendra left because of his competition with Teertha about who was a better therapist -- just fights of egos.
Deep down, unconsciously, they must be thinking that sooner or later I will have to die. Teertha had taken it for granted, without anybody saying it to him, that he was going to be my successor. Perhaps he was spreading the idea that he was going to be my successor.
The day I announced in the commune that nobody is going to be my successor, only two persons were unhappy -- and I looked at both the persons: one was Sheela and the other was Teertha. Everybody was happy, rejoicing, but these two people were sad. That was their aim -- perhaps not consciously, but unconsciously."

see also
Paul Lowe at Byron Events
Paul Lowe on facebook
Paul Lowe YouTube channel
The City of Rajneeshpuram
Osho commenting on Teertha
On the Tendency of some of Osho's Sannyasins, especially the male Therapists named Anand, to get Delusions of Grandeur
Ma Anand Poonam