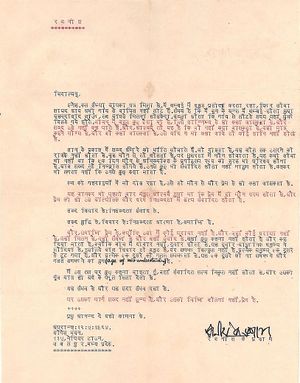 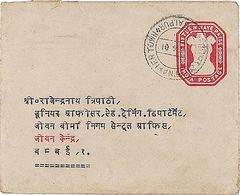 This letter was typed on plain paper in Jabalpur on 12th May 1964 and addressed to Rajendranath Tripathi, who worked for the Life Insurance Corp of India in Bombay, after starting with them in Nagpur. It is one of four letters known to have been written to him.

The salutation appears to be "Chidatman", which can also be seen in another typed letter from May 1964. The letter is signed with "Rajneesh ke pranaam", both written and typed. It is not known to have been previously published.

There is a typed "Rajneesh" on top in place of letterhead, the style of which varies from the other letter in May mentioned above in that the typed "Rajneesh" is in red rather than black and is underscored by a series of Hindi keyboard characters not known in Western keyboards.

We are awaiting transcription and translation. The envelope belonging to the letter is underneath. On the envelope can be seen a series of lines in the address, one of which is in red, as if for emphasis. It reads, "Jeevan Kendra", or "Life Center". This could plausibly be a particular section of Life Insurance Corp of India's operation. But it is also two of the three words of Osho's org at the time, Jeevan Jagriti Kendra, so perhaps Osho was smiling when he did this.

Other letters to RN Tripathi: