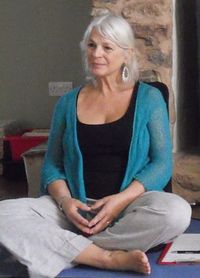 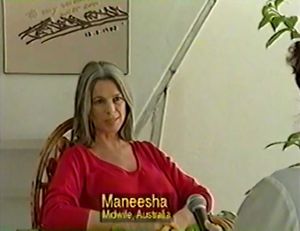 Born in Melbourne, Victoria, Australia in 1947, Maneesha graduated as a nurse. Meeting Osho in 1974 changed the course of her life. In Pune, she lived in Osho's house and edited many of his books, including nearly all of the darshan diaries. As well, under the name of Juliet Forman she wrote what he referred to as the "historical documentation" of his work in the form of a trilogy covering the years from Pune One through his World Tour.

She was part of his entourage during the turbulent World Tour and on the return to Pune was the one who addressed him during discourse with questions and sutra readings, becoming famously "Okay Maneesha."

Meeting Anna Freud in London some years ago, and being with her in her last moments, was a catalyst for a new direction for Maneesha. While maintaining her interest in meditation as a resource for all aspects of living, through that experience, she also saw the potential in bringing meditation to the dying process and co-founded The Sammasati Project, which offers a different vision of living and dying – that is, with awareness and celebration. With co-facilitator Sudheer P. Niet, she is presenting The Sammasati Support-Person Training in the UK and travelling internationally, offering a series of workshops.

bibliography
Bhagwan: The Buddha for the Future, on the evolution of Osho's first commune in Pune One.
Bhagwan: Twelve Days that Shook the World, on Osho's arrest and twelve-day disappearance at the end of the Ranch era
Bhagwan: One Man Against the Whole Ugly Past of Humanity, on the World Tour
Impara a Meditare: technica per una vita viva (to date available only in Italian)
My Peak Moments with Osho, the Unsurpassable Man (currently available only in Japanese - Oshō to no shikō no shunkan (和尚との至高の瞬間))

discography
2002 : Tuning Into the Moment
2004 : Bubble of Joy: Guided Meditation