From The Sannyas Wiki
(Redirected from Sw Dhyan John)
Jump to: navigation, search 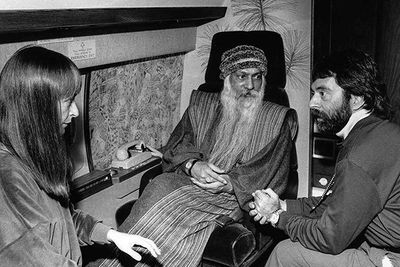 Ma Prem Nirvano, Osho and Yogi, then known as Vivek, Bhagwan and John

Yogi is from Kansas City MO originally, where he became an MD, practicing medicine from 1969 until he moved to LA in 1981. There he met Ma Prem Kaveesha, also from KC, who introduced him to Ma Prem Hasya. They were the nucleus of the "Hollywood crowd", who became Osho's chief administrators at the ranch after Ma Anand Sheela left.

There, as John, he was President of Rajneesh Investment Corporation, a trustee of the Rajneesh Modern Car Collection Trust, an announcer for interviews in The Last Testament (Vol 3) and (Vol 4), and played many other roles.

Later, he was part of Osho's entourage on the World Tour and, as Yogi, was named by Osho to the original Inner Circle. He, Hasya, Kaveesha and Ma Shantam Avirbhava left the IC en masse in 1991. It was said "officially" that they left to form a meditation academy in Sedona AZ, which DID happen, but views differing from those of the eventual ruling class in the IC may also have been involved.

see also
The City of Rajneeshpuram
The Inner Circle