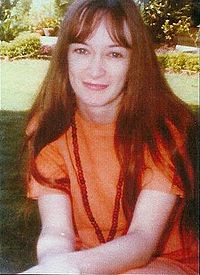 "I had a girlfriend when I was young. Then she died. But on her deathbed she promised me she would come back. And she has come back. The name of the girlfriend was Shashi. She died in '47. She was the daughter of a certain doctor in my village, Dr. Sharma. He is also dead now. And now she has come as Vivek to take care of me. Vivek cannot remember it. I used to call Shashi Gudiya, and I started calling Vivek Gudiya also, just to give a continuity.
Life is a great drama, a great play—it goes on from one life to another to another."
The Path of Love, ch 1

"Perhaps he [Osho] could have hung on still longer – but just before his birthday celebration in December [1989] Vivek was found dead in a Bombay hotel room. No public announcement about what had happened was made. Her body was brought back to Poona, and burnt on the ghats at night with only a handful of friends present. The story was that it was a drug overdose – but whether accidental, or a deliberate decision to kill herself, no one knew. In fact no one knew whether she did really die in Bombay – or whether it was in the ashram, and they just hushed it up. Whatever it was, she seems to have been in a state of great inner pain. Of all the inadequate things in this account perhaps the worst has been my failure to do justice to Vivek. I never knew her, and there has been no way I could work her into this; but so far as I am concerned no other person, apart from Osho, played so important, or so fine, a role in the history of sannyas...In her way she was as alone and mysterious as Osho himself. No one seems to know anything much about her. Osho’s ‘caretaker’ they call her in the ashram books. This is really disgusting. She was his lover, and the only friend he ever had. She gave everything she had, and I think it tore her apart. To have been that close to enlightenment when she was with him...only to have it disappear when she was alone again. To have been surrounded by all those ashram women, all eaten up with jealousy; and then to have had to watch him die."
Life of Osho

see also
An interview by Ma Yoga Sudha with Vivek
Osho’s Companion – footnote in History
Nirvano, a beloved friend: Ma Prema Veena on OshoNews, after hearing Ma Deva Anando in a recent radio interview in Australia making comments on Nirvano's mental health
Episode 60 - Keeping Osho on Planet Earth Interview/podcast with Ma Prema Veena on loveosho.com, 11 December 2019. Transcript of this podcast.
Letter written on 10 Nov 1971 - A letter from Osho to her
The City of Rajneeshpuram
In the Eye of the Hurricane
The Fate of the Charismatic Leader’s Consort - Ma Yoga Vivek, the Intimate Companion of Bhagwan Shree Rajneesh/Osho : article in Nova Religio (2021) 24 (4): 58–83. The author's web-page also has a link to a Powerpoint presentation on the subject.

references
(*1) Note that the aka of "Alexa/Alisha Alexander" is sourced from an article in the Hindustan Times and may well be incorrect.