(*2) Shailendra confirmed this date and added "am" to it.

(*3) Source of date/place is 1980 book edition. This date and place match to date from Manuscripts ~ Reports Timeline Extraction, but quotes from the manuscript do not, which are very close to Man Ka Darpan ~ 01 event. So for now two talks on this evening, one of them erroneous.

(*4) This chapter is in fact combination of two parts of two events (Asambhav Kranti ch.2 and 5) from Matheran med.camp, thus a date stated in 1980 is false. 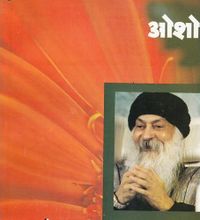 There is another, likely earlier edition which came to light while researching this book, but information on it is so butchered that it doesn't really merit putting on the main page for this book. Images at right represent the purported front and back covers, more about them below.

The information was found at Osho World, and consisted of the images, an ISBN 81-8393-039-5, a publisher, Sadhana Pocket Books, and a short blurb. This ISBN (hyphenated) is found only there but when the hyphens are removed, it is found at four booksellers' pages. Great, except they're assigning that ISBN to another Osho book, Samund Samana Bund Mein (समुंद समाना बुंद में). Well, okay but, uh, they're listing it as "Samudra Samana Bund Main," and, oh well, never mind.

The images are unusual to say the least. There is no title on the front cover, a significant omission. And it is a very different dimension from the back cover. How are they going to fit together? If the left side of the square-ish front cover were folded to cover the book's spine, it would be a book as thick as War and Peace (Large Print edition), so no, that won't work. Maybe just a large piece of the cover is missing, where the title is? Who knows?

At least the back cover is a normal dimension. It also appears to have a different ISBN but too low-res to make out. But is very likely a genuine back cover, as some of the Panth Prem blurb from oshoonline.com can be made out:

Much of the discussion below was written before the 1989 Rebel edition showed up, making it partially obsolete. Thus, mentions of "the book" refer to OMI's 2013 edition, which was published to fit with the 2014 English translation. So five chapters and so on, whereas the 1989 edition had seven. New discussion follows the old. The 1989 edition's TOC has been added to the table in the old discussion for easier comparison. Note that the 1989 chapters have been re-ordered here to make like titles align; chapter numbers have been preserved.

There was also a question of three vs five discourses/chapters. It seems that three is what you get from freebie audio download places and five from audiobooks and books. But there are a few twists. Below, a comparison of titles from book, Osho World audiobook and osho.com audiobook:

The colophon of that translation:

"Originally published in Hindi in 1980 as Panth Prem Ko Atpato." (So there should be a 1980 edition.)
"Extemporaneous talks given by Osho in Mumbai, Ahmedabad, Pune, Matheran and Indore, India."

In addition to this, the 1980 edition was attested to by the recent publications list of Rahiman Dhaga Prem Ka (रहिमन धागा प्रेम का), published in July 1980. In that list, it was referred to as a "pocket edition". The publisher was also on that basis assumed to be Rajneesh Foundation. -- doofus-9 18:46, 12 November 2017 (UTC)

There have been lots of changes since 1989, perhaps under the influence of a variety of priorities. Not only does 1989's book have more chapters, including one not found in any of the other formats, its chapters are in a different order. More research is needed! -- doofus-9 03:44, 23 February 2018 (UTC)

Dec 2019 brought new data on first edition published in 1980 by RF, incl. dates stated in ends of chapters. These are:

Beginning and end of ch.4 of Shailendra's PDF matches with text of 1980 edition (ch.3). This chapter looks as combined: