Notes
(*1) These audios are present in Khajana collection, but not in the Osho.com version (e3), in stead in the OW version (e2).

Regarding the dates, this page has had Feb 25-27, 1969 since it began. Two significant new sources have arrived since then. "Doc X" has it on Jan 16-19, 1970 at Bhavnagar, though still five discourses and part of Neti Neti, while Neeten's Osho Source Book has entries for Satya Ki Khoj on both dates. Difficult for those who like it simple! FWIW, Neeten has only one citation for the Jan '70 dates, in the Appendix, and several in different places for the Feb '69 dates; among these, he cites Gyan Bhed in the text of his Jabalpur section, referring to a camp in Junagadh on Feb 25, 1969 with the theme of "Exploring Truth".

His collection is still in rawish form, so these data may change but until then, we might entertain the possibility that there are two series with that name. In support of that, we note that the Appendix entry re the Feb '69 dates has "Satya Ki Khoj aka Neti Neti (The Beginning of the Beginning). 25.02-27.02.1969. 5 talks. Junagadh camp," and re the Jan '70 dates "Satya Ki Khoj. 16-19.01.1970. 4 talks. Bhavnagar." The differences are that the latter is not aka Neti Neti and it does not have five discourses, both significant lacks, while Doc X has five discourses at the Bhavnagar event and represents it as part of Neti Neti. FWIW, five discourses would fit more naturally in the three days than in four (with one the opening night and two each the next two days, a fairly typical camp format.) And Feb '69 would let it be in the sequence given by Tao Vision for the whole four-volume Neti Neti group.

And last but not least, the Hindi blurb for the book mentions meditation experiments in Junagadh, so even if there are two SKK's, this one is the Junagadh camp one. The Jan '70 proposition for the Neti Neti Satya Ki Khoj thus falls short in several ways, so for now sticking with the original dates, and if there is another Satya Ki Khoj in Bhavnagar or anywhere, it will have to work hard to prove its existence. See also Talk:Prem Darshan (प्रेम दर्शन) for another candidate for the Jan 1970 Bhavnagar spot.

A couple of edition notes: All info comes from Neeten. "Jayati," named as the compiler, is heretofore unknown, and since the name so closely resembles the well-known Jyoti, though the latter is named fewer times, once as co-compiler, this may be a mistake. And Neeten has a citation of another early edition, a first edition (1970 or 71) from "Bombay," based on cards at both the Indian National Library and Book Database (separate entities). -- updated Sarlo (talk) 10:00, 10 September 2014 (PDT)

And now we can add Ageh Bharti as a source: In his book Blessed Days With Osho, he reports bringing a bundle of SKK books just published to the Dec 9-12 camp at Junagadh. They had been published by one of the camp organizers and his wife, and Ageh mentions the talks having been given previously at Junagadh. This seems to nail it, and suggests that this edition might well be the less professional one on the left of the two shown in Neeten's pic. -- doofus-9 16:13, 29 December 2015 (UTC) 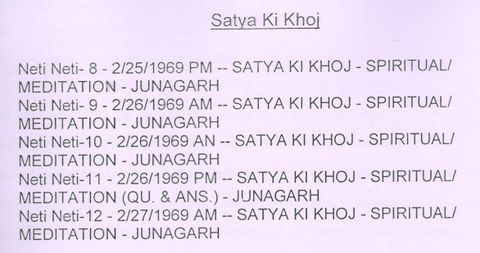 Changed first edition from Neeten. Reasons: the info based on cover; the existence of real first edition (although with unknown year). The name of compiler presents in first edition. Anuragi will check this name in second edition.--DhyanAntar 05:27, 19 February 2019 (UTC)

Somewhat of an epilog for the Two Series Named SKK Theory:
Hindi series of talks with dates (source document) offers this up as an infobit: "Satya Ki Khoj, 4 talks, 16-19.01.70", which tries to resuscitate the possibility of SKK actually happening on these dates. The simplest resolution of this development seems to be that the series was actually once thought of as SKK, but eventually it made sense to give it another name, ie Prem Darshan (प्रेम दर्शन). -0- doofus-9 23:28, 28 June 2020 (UTC)