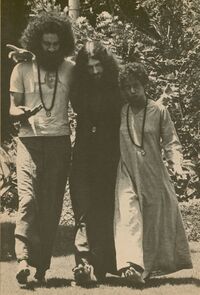 Prasad (middle) with Rakesh and Sudha

Prasad was a German sannyasin, the much-loved leader of the Centering Group, a gentle play-awareness group given to nearly all new arrivals in Pune One. He was a member of the original Inner Circle but left it early and left his body about six months later, in 1990, due to a brain tumour.

He has a long, ecstatic darshan with Osho reported in The Madman's Guide to Enlightenment, material not included in the CD-ROM. Images of an interview about this with him conducted by Maneesha have been uploaded to the Madman's Guide page, from p 355-359 of the book. In addition, we have a short description below from p 353, in Maneesha's voice. Prasad's Centering group in is darshan that night, as was done in those days upon completion of a group.

Prasad, how was the group?
And instead of his customary,
It was gut! uttered with a variety
of inflections and accompanied
by appropriately enthusiastic grins
or misty blue-eyed gratitude,
he murmurs,
It was really beautiful.

Come here! you order him chucklingly,
and I imagine he starts with astonishment
before he begins to crawl toward you, head down
Vivek's head is down now too,
her eyes closed,
her nose already turning pink
with emotion
as Prasad kneels at your feet,
his head just inches away.

As you place a foot on his hands
his breathing becomes deeper, louder,
and then more so,
as if he is in orgasm.
You motion someone forward
to place her hand on his back,
and help this loving annihilation.
When you call him some aeons later
he remains where he is,
and Vivek reaches for a handkerchief
(one of yours!)
and blows a sympathetic nose.

He finally crawls back to his place
accompanied by collective group chortles
and there he lies
while Christa, from his group,
begins to talk to you.

After Osho's words to Christa, Maneesha resumes her commentary on Prasad's experience. That part and her interview with him can be found in the images on the Madman's Guide page. During the interview, Prasad refers to an earlier interview published in the Nov-Dec 1977 issue of Sannyas Magazine wherein he describes his experience of being conscious under anaesthesia. Images of that interview have also been uploaded there (some scrolling needed).

Prasad was one of Osho's pilots and Sw Veet Vishada tells this story about him :

"The Helicopter incident
Few people know that Prasad was an accomplished pilot. And it was as a helicopter pilot that I owe him my life. With me along as the Rajneesh Security guard, Prasad was charged with escorting Bhagwan's car from Lao Tzu grove to Rajneesh Mandir and back. During Bhagwan's morning presence in the hall, Prasad landed the helicopter on the high ridge above the mandir building. Earlier some mechanical trouble had been found with the helicopter's main rotor and supposedly fixed. And we we had been cleared to fly that day in spite of this obvious red flag. However when we took off for the return journey to Lao Tzu grove, the mechanical fault resurfaced: we had just lifted off and cleared the ridge behind us when the 'low rotation' alarm began buzzing loudly and we started losing altitude uncontrollably. Prasad immediately wrestled with the helicopter, avoiding power lines and going into auto-rotation although we didn't have enough altitude for this (the only maneuver available to slow descent). Although we made a very hard landing we were both safe and the helicopter sustained only minor damage.
When I spoke to Prasad about the incident later he admitted that he had, while waiting on the ridge that morning, read up on what to do in such a case.
In my case I thank God that the pilot that day was Prasad, our only German pilot."