This is the summary of our present knowledge on this title. Correspondence between books and with audio has been checked by Sw Antar Rahi.

There are a number of anomalies connected with this book. Most are connected with particular editions, but one is general, and that is: Indian audio free download sites consistently show only three discourses in this series but the book seems to have five chapters, or "sermons"/discourses (प्रवचन). Complicating this are the audiobook sites, in their individual ways. Osho World titles their relevant page "HKDD 1 to 3" but still manages to offer all five of the titles, in the order given below of the Diamond book. Osho.com goes one better and offers six titles, but then the catch, only the first three are actually available. Their sixth title fwiw: स्वीकार और समझ से क्रांति.

July 2017 update: The 1989 Tao edition TOC and o.com's latest version have been added below to the Diamond TOC. I also re-checked OW's audiobook offering. It is unchanged since the above was written and still identical to the Diamond. O.com now has only five titles, but the 4th has become the 5th (and unavailable) and the new 4th is something completely new, whatever that might imply. And the Tao is fairly similar to the Diamond, with their 3rd and 4th interchanged and Tao's 4th's title altered in a minor way. -- doofus-9 06:45, 16 July 2017 (UTC)

All five chapters (or six if you include the earlier outlier from osho.com) are concerned with meditation; the first is a bit of an oddity, being for whatever reason a Devanagari transliteration of "Medicine aur (and) Meditation". Perhaps this English resonance is not out of reach for Osho's Hindi readers.

Shailendra has shared about this first chapter that:

1. This lecture is given at a medical college.
2. Most Hindi readers can understand this easily.
3. Osho explains in this discourse that both words originated from the same Greek root, so their meaning is connected. Meditation is also a medicine -- Man as such is a dis-ease, Mind chattering all the time is a sickness, thoughtless awareness is the treatment, cure for it. Only meditation can make human beings at-ease.

Listening to the OshoWorld audio, chapter 1 is clearly the Hindi original of the introduction to From Medication to Meditation. That talk is probably from on or around Aug 31, 1970. --Sugit (talk) 12:47, 21 January 2016 (UTC)

Hasiba as a Compilation

Shailendra adds, regarding the varied sources for the different chapters:

Talks are compiled from here and there. There is no inter-connection between themes of discourses, aside from being about meditation. No connection with the Title also. Many such Titles are given by Sw Narendra Bodhisatva (in charge of Hindi publications for a long time) to compilations of miscellaneous talks. Title does not reveal anything regarding the contents. For example this title means meditate, laughing and playing, ie without being serious. This is almost 1000 year old Hindi, used by Sant Gorakhnath. Today, nobody can understand even the literal meaning of title.

Man Ke Paar (published as a booklet in 1972) is the same material as Hasiba Kheliba Dhariba Dhyanam-4. It is not one single discourse, but a compilation of many question-answers basically related with Meditation -- going beyond mind. Its language indicates that much part is not spoken, but written, or edited by Osho himself.

Up to now, the wiki has had scant information on Man Ke Paar, really only the fact of its publication, by a little-known publisher. It is also curious that its position in Hasiba is also a bit elusive, being variously ch 3, 4 and 5 in the different editions above. Perhaps Gorakhnath is still laughing. -- doofus-9 17:09, 22 July 2017 (UTC) 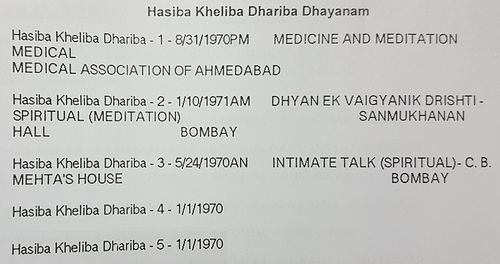 Some Dates and Places info has come from Jagdish to augment what we know already. It is not complete but even in its incompleteness it is suggestive:

It can be seen that the first matches well with the first across all sources. By the way, cf. Talk:Jo Ghar Bare Aapna.

The second likewise (image has the title transliterated).

The third has the three sources in the table agreeing, but with no more info to correlate, we may have to accept the "intimate talk at CB Mehta's house" as it is.

There is a compelling source indicating this discourse was on Jan 18 1971, not Jagdish's Jan 10, so this new date has been entered in the Timeline. In fact, Jan 18 was also stated by Gyan Bhed, as an unnamed discourse on this theme. New authoritative source is Laherubhai's memoir Blessed Moments with Osho. Not only does Laheru mention this date but he discusses the preparations and promotion that went into it and then has a whole mini-chapter on what Osho said on the occasion, entitled "Meditation, a Scientific Outlook", exactly a translation of Ch 2's title, ध्यान : एक वैज्ञानिक दृष्टि, and "Dhyan Ek Vaigyanik Drishti", Jagdish's transliteration. And at the end, Laheru states explicitly that this is Hasiba #2.

Formerly, Jan 18 was Gyan Bhed's unnamed discourse on this theme and Jan 10 was Hasiba #2 according to Jagdish. They have been switched now in the Timeline. There may not be anything in fact on Jan 10 but that possibility has been allowed to remain in the Timeline. And Jagdish's "am" time has been allowed to persist and apply to Jan 18. He is the only source for a time of day, so that may be a bit thin. -- doofus-9 05:12, 27 August 2019 (UTC)

Although other source Hindi series of talks with dates (source document) indicates the 10th of January: "Dhyan Ek Vaigyanik Drishti, 1 talk, 10.01.1971". This is title of chapter 2 and the source confirmes info from Jagdish.

Hovewer date stated in first edition (1979ed.) of the book is 18 Jan 1971, Bombay as Laherubhai and Bhed says. We sticks to this date. But it can be incorrect: Bhed and Laheru could use this book as source for date (their book pubished much later than Hasiba book), then Jagdish and Hindi series of talks list can be right with 10th.--DhyanAntar 08:05, 5 June 2020 (UTC)

About the Rebel edition, the purported ISBN, 8172610483, is not found anywhere, even by Google web search. Oh well.

About the Diamond edition, various sources say it is Fusion (an imprint of Diamond), pub date 2005 or 2006, 104 or 128 pages. The data on the book page are taken from the Diamond site.

About the "unknown" edition, the pic was found in several sites along with text from the book, and is most likely a web-only image, associated with e-book versions. -- updated doofus-9 12:52, 15 March 2015 (UTC)

My question about Event names. Should they correspond to most early edition. Wiki know Rebel 1989 as early. Does that edition has another order of chapters (ch.3<-->ch.4 or chapter titles were been changed and text of them the same.--DhyanAntar 18:44, 13 December 2018 (UTC)

We should be flexible about this, like with some of the English series. First rule is to use the first edition, but in this case nobody has even access to that edition... --Sugit (talk) 08:52, 18 December 2018 (UTC)

Last word in devanagari of RF and later editions are different: ध्यानं and ध्यानम्. Pub info of RF's edition tells "Dhyanam" as our present title. Are these two different spelling of the same word?--DhyanAntar 06:47, 15 April 2019 (UTC)

Essentially, yes, these are two different spellings of the same word, arrived at in different ways. The first has the nasalizing dot (ंंanusvara) which adds a nasal sound to the inherent vowel that goes with न. In transliteration this is variously rendered as an "n" or an "m". The second spells it out more fully and precisely, with the mark on the final म (virama) cancelling its inherent vowel. -- doofus-9 18:58, 15 April 2019 (UTC)