Gyan Bhed gives the dates for the camp where these talks were given as Sep 17 to Oct 2. "Doc X" gives the dates as Sep 17 to Oct 1, and Neeten (see Osho Source Book link at his page) as both Oct 1 and Oct 3 in different places. Another source says Sep 17 to 30, while a calculation based on the frequent format of one discourse on day 1 and two each day thereafter makes it 17-29. Your pick!

All sources at least start on Sep 17, and the agreement of two reasonable sources on Oct 1 makes that look pretty good, besides being in the middle. And throw a couple of Early Talks into that time frame and it's almost filled up, in the sense of conforming to the "formula" of two a day after the first day, while still leaving the details of which discourse when a bit vague.

Gyan Bhed is not entirely clear about the location of the camp, referring to both Srinagar and the Kesar Valley. Neeten also has both but another source goes with Kesar Valley, which is where Pahalgam is, so we'll go with that, since we have to arrive at Pahalgam somehow for the two Early Talks mentioned above and Osho's visits to the graves of Moses and Jesus. And an interesting factoid from the trivia bin: Pahalgam means "village of the shepherd", which turns out to mean exactly the same as Gadarwara.

While we're here, it is also worth considering the time Osho spent in Srinagar prior to the camp. It is not germane to Drishti but helps to complicate matters regarding another book, Sambodhi Ke Kshan (सम्बोधि के क्षण). Two sources for that book report talks on Sep 14 in Mumbai, which would be tight at best, but Gyan Bhed and Neeten's info is prohibitive, having Osho arriving in Srinagar four and ten days respectively before the camp to take in the natural splendour of the area. -- updated doofus-9 (talk) 06:55, 18 April 2015 (UTC)

Latest word on this is that these "early arrivals" in Srinagar have been deep-sixed by two new sources. Perhaps they had been planned but it is now highly unlikely that they ever happened. First, Hindi series of talks with dates (source document) adds weight to the dates in Mumbai on Sep 14, now even extending to the 15th. Then there is an event in Delhi on Sep 16, which was always around but only hypothetical, potential, putative. The other new thing is Letter written on 24 Aug 1969 where Osho writes to Kusum that he will be flying from Delhi 11 am on the 17th and arriving in Srinagar at 1 pm and he is hoping she will meet him there. Seems to be the last nail in the coffin for the tourist days in Kashmir. -- doofus-9 23:02, 14 June 2020 (UTC)

About the image, Drishti2: It looks elongated, like one i saw in my perambulations. Perhaps could be compressed vertically. -- Sarlo (talk) 14:41, 10 February 2014 (PST)

of course it's stretched. so i've un-stretched it.

btw here is the original image: 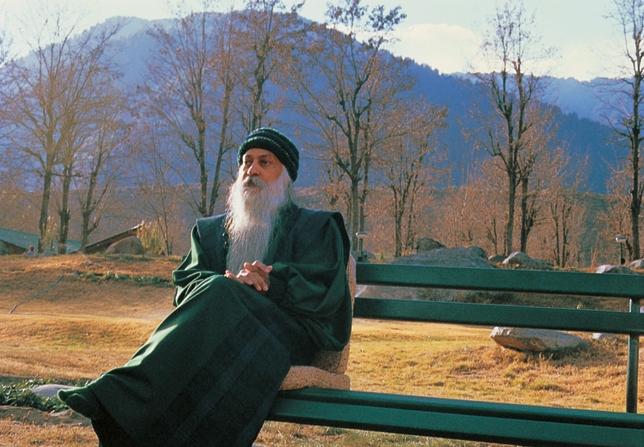 And about the tiny png image for the 1971 Motilal Banarsidass edition, that one was found at G**gle books, right on with the year and publisher, but suggests a 790 page count. You can search inside the book there with the right Devanagari search terms. Good luck with that. -- doofus-9 16:17, 29 August 2017 (UTC)

With the help of both 1971 and 1974 editions (Motilal edition has two typos in year; JJA edition has a typo in day-night designation) we have dates below (1971-Motilal ed. has other numbering of chapters, but order is the same as below). But text check showed that not ch.10 and 11 were swaped in the book (events and audios of the series are in chronological order) and 19th event was devided on two chapters. So it looks as ch.10-11, 19-25 have incorrect dates, which were printed sequently.

"A compilation of 26 discourses and quizzes given by Lord Shri Rajnish in a camp held from Srinagar and Pahalgam on 17 September, 1969 to October 2, 1969."

1 Oct pm is occupied by Early Talks ~ 02. I used above dates for 25 events and skipped that occupied date. There are some uncertainties in Srinagar and Pahalgam dates (gaps in dates, crossing with other talks and one undated talk during Pahalgam dates), see Timeline for the view. It needs other sources for those talks.--DhyanAntar 06:41, 27 January 2021 (UTC)

Source for the info for this section is Jain eLibrary (search for Osho Rajnish), a pdf'd scan of a hard copy recorded in the Asiatic Society, Calcutta-16 in 1975, according to its rubber stamp.

There are a few issues, first the "1917" date. That is found in the two places noted, so likely the source is the editor, Dayanand Bhargava, who personally dated his "editorial" then. We cannot know for certain what the correct date is but 1971 would be a decent guess, being a simple transposition. OTOH, in the books list in back we see The Ultimate Alchemy, Vol 1 and 2 offered as being in print. Their first known editions are 1974 and 1976 respectively, so some serious time warp issues here. Throw in The Inward Revolution and Dynamics of Meditation (both have talks going into 1972, pub 1973), I Am the Gate (talks 1971, pub 1972) and that pretty well invalidates the 1971 pub date unless the books list is something thrown in by the pdf creators, or this is the 1974 edition, with the putative "1971" info carried over.

They do say about Ultimate Alchemy that it is in two vols, as if there were some edition not yet known by the wiki, and indeed the Bibliography section of Neeten's Osho Source Book allows for two volumes of Ultimate in 1974, with frequent republishing in the following years, so 1974 it must be, with as noted above, the presumed 1971 edition info possibly carried over. And this is not unreasonable, since Dayanand Bhargava is not known to be associated with any of Osho's books except in the early Bombay era and earlier.

Another indication of 1971-ness is the edition of that year from Motilal Banarsidass. A first edition by an outside publisher would not be all that likely but Dayanand wrote his editorial from Delhi and may even have had some connections there to get it published (MB is also in Delhi). Whatever!

803 pages comes from the TOC, being the last page specified of Osho's "sahitya", ie literature or books list. Also an "803" can be made out on that books page. The TOC pages in the pdf are especially poor quality, and with all kinds of references to details of Q&A, so they will not be transcribed. But a few things will be noted from what can be made out of that unfortunate TOC:
1. There are 26 chapters, whereas all sources have MMDM as 25. The last one is relatively short, 18 pages, and explicitly labelled as समापन प्रवचन, or "closing discourse", so it may have got amalgamated with another chapter in other editions.
2. None of the apparent titles found in the TOC above can be found in the pdf TOC.
3. Chapters 1, 3, 5, 7, 9, 20 and 13 are labelled as discourses, the others all as Q&A discourses except #26, as noted above.

One more oddity remains, that is the title of the work as a whole. This is not found in the url or on the Jain Library site, or in the text of the pdf, but apparently embedded somewhere electronically in the pdf. It reads: "Panch Mahavrat Pravachan Jyo Ki Tyo Dhari Dinhi Chadariya - Mahavir Meri Drushti mein (part of book)". Some crossed wires there, which may invalidate the whole document, or maybe is a totally insignificant glitch in Jain Library's markup. Again, a hearty "Whatever!" -- doofus-9 20:42, 6 October 2017 (UTC)

There are a number of things to consider with your apparently simple questions:

First, re Mahaveer-vs-Mahavir: The Devanagari form, महावीर, "should" be transliterated as Mahaveer. So that would be the most correct. Whether it is the most desirable is a matter of opinion. In the past, the practice here in such "disputes" has been to go with the commonest usage "out there" where the titles are mentioned, especially among booksellers, and it has historically been "Mahavir" in this case.

Against that (wiki) historical usage, we have the increasing ability of search engines to find alternate renderings easily, ie in this case, searching for "Mahavir" finds "Mahaveer" and vv, so there is less need for conforming to the commonest usage in booksellers, who often have little regard for correctness.

My personal preference has always been the "i" over the "ee", but that does lead to ambiguities and incorrectness, so perhaps it's time for a change in that regard. OTOH a sweeping change to all correctness regarding "i"-vs-"ee" will lead to many changes, the most pervasive being the ultra-common pre-/post-position की, very widely rendered as "ki" -- and more aesthetic imo -- but "should" be "kee". If you wanna go there, you will have lots to do :-)

Second, Dristi-vs-Drishti: Current G**gle Translate usage transliterates दृष्टि as "Drishti", but allows "Dristi" as a possible translation of दृष्टि , ie as an element of the list, "sight, eyesight, dristi, estimation, look, peep", etc, as if dristi is an English word. G**gle Translate often includes Hindi words in its list of translations for your target word, and it's a strange, suspect practice, at the least not very useful.

Further, we have a number of Devanagari characters that are in the same area to consider: स, ष and श. The first transliterates unambiguously as s or sa, the third unambiguously as sh or sha, with the second, the one under consideration, more ambiguous. Usually however, only स is rendered as s/sa, with the other two as sh/sha, so that when you see an s without an h, you know what you've got. And when you see sh, you know there is ambiguity.

So because of all that, i would like to leave "drishti" as it is, Shailendra's rendition notwithstanding.

Third, the colon: It is clear that it is all the same material from 1971 and beyond, apart from editing preferences of their eras, etc etc, but the wiki convention is to have a new page for each title change, no matter how small. I personally would leave it alone and not bother, but that's just my laziness, and the other guys may want a new page for this JJK edition, so ask them. I will not stand in the way of any change in this regard. And if and when it is so changed, you will need mentions on each page of "previously published as" and "later published as" and so on. Whoever wants to bother is welcome to it.

Comparing OW audios with Shailendra's PDF (checked their beginnings and ends only), here are only notes on incompleteness and mismatch:

First half of last 2 mins of 18th audio - it looks as a part of meditation (it is not part of the PDF, it was transcribed by a friend):