Difference between revisions of "Meditation Camps" 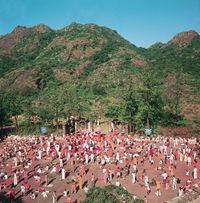 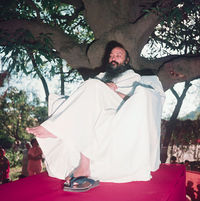 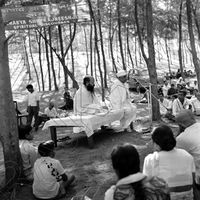 Camp at Nargol, by the ocean, under the fabled Saru (casuarina) trees 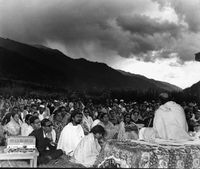 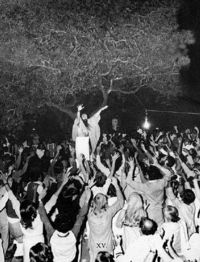 Leading Tratak meditation at one of the That Art Thou camps, see book page for more

Meditation camps (Hindi: sadhana shivir) have been a feature of the sannyas landscape since 1964. Prior to that, Osho was lecturing, traveling and becoming well known as an electrifying speaker, but he saw that people were not being transformed, so he introduced camps, extended retreats where the focus was experiential rather than filling one's head with concepts. He would still speak at these retreats, often at length, but the event was not over when he stopped speaking. Then it was time to visit the interior landscape, to experiment with his techniques and use his words as signposts of things to look for, guidance regarding pitfalls and so on. Most of the day(s) would be spent in self-exploration, using a variety of ways to ask "Who am I?" Deeper and deeper. See also Talk:Osho: Call of the Ocean for a nice quote on why camps came about.

From the back cover of The Perfect Way, an English translation of his discourses at the first camp in 1964: "These discourses are the outcome of Shree Rajneesh's first testing of a new idea, the meditation camp, envisaging an intensive programme lasting several days, which enabled the seekers to dive totally into an atmosphere of meditation."

As they evolved, camps were held several times a year in various formats, lasting a couple of days to as many as fourteen, and in "exotic" locations mainly around the northwestern states of India: seaside resorts, hill stations, usually but not always away from cities. Nargol, Matheran, Mt Abu and others became fabled places in the sannyas iconography.

Traveling to such places came to an end in 1974 after Osho moved to Pune, but the camps did not end. At Shree Rajneesh Ashram, it became possible to have these intensive retreats more often, though they were conducted by others who had imbibed them sufficiently to be able to lead them. But even with others nominally leading the meditations, Osho still came out daily to give discourse in the morning and darshan in the evening.

The camps eventually settled into a somewhat standardized format, which ran more or less the same for the last five years of Pune One, and that was: 6-7 am, Dynamic; 8-9:30ish, Discourse; followed by Sufi Dancing, Vipassana, Nadabrahma and Kundalini and then an evening meditation which would be Gourishankar for one camp and Nataraj for the next, while Osho was giving darshan. The camps ran for ten days, from the 11th to the 20th of each month. For most of that time, both daily meditations and whole camps were led by Sw Christ Chaitanya.

The easy availability of such opportunities to jump fully into Osho's meditation techniques made it easy for newcomers to get a feel for it, though they weren't only for newcomers. And so camps continue to this day around the planet, as focused retreats or also sprouting new forms such as 21-day Dynamics or Mystic Roses, intensives spread out over a longer period.

A timeline of available info thus far is presented below regarding Osho's historic traveling Meditation Camps, from the days when he was based in Jabalpur and Mumbai. Info comes from here and there, two main sources being The Rebellious Enlightened Master Osho and Neeten's Osho Source Book. Links are provided where applicable and available for the books arising from camp discourses. A few other "special" / traveling events are included. More info will be coming, and see also Timeline (link on every page in the upper left sidebar) for a more detailed look at discourses, letters and events of Osho's public life.